Are you ready to innovation?
Energy router - intelligent energy management 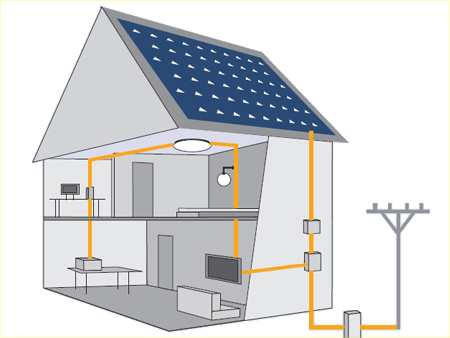 Increasing pollution of the environment, together with shortening supplies of the fossil fuels, gave rise to the search for other sources of energy. Favorable pro-renewable environment with significant economical support was created on national levels, based on international treaties. The main focus of the support was fotovoltaics – this, together with decreasing manufacturing price of the panels caused a boom in fotovoltaic electric power stations, which now form a sizable share on the total electricity made. However, the expansion and connection of more fotovoltaic electric power stations is being prohibited by the electricity distributors themselves with the argument of great impact load on the transmission circuitry. The energy output of a fotovoltaic electric power station is directly proportional to the intensity of incoming light. This intensity varies throughout the year, day or even a single hour. Summer and winter, sunrise and sunset, mist, clouds, rain, covering with dust, leaves, snow – all this has great influence on the actual amount of electricity made. Similarly, the energy output of wind and water electric power stations strongly depends on actual natural conditions. If the electricity is not consumed immediately consumed, it flows back into the distribution network, where it adds up to the residue of other producers in local area. Because the producers are in the same area, they also share similar meteorological conditions, and also the curves of transmitted power residues over time are very similar. Dispersion of the residue is not possible – on the contrary, it causes synchronous power impact loads of the transmission circuitry. It is obvious that in case of small and medium producers it is favorable not to overload the transmission network. The donation program mentioned earlier is set up to financially motivate these small producers of electricity to consume the created electricity immediately, instead of feeding the residue electricity back into the network. The focus of technological solution is to design an appliance that would eliminate the described problem and ensure consummation of the created energy directly at the producer.

The objective is reached with a device, that compares the immediate amount of created energy in an alternative electric power station with the amount of consumed electricity according to need in one, two, or all three phases. Should it detect that the production exceeds the consumption in each single phase, part of the exceeding energy made, or the whole of it, is then diverted into electric appliance(s) that enable this through their nature – see below. The diversion itself is realized on the following principles: Energy router CPU, Energy router PWM, Energy router COMBO 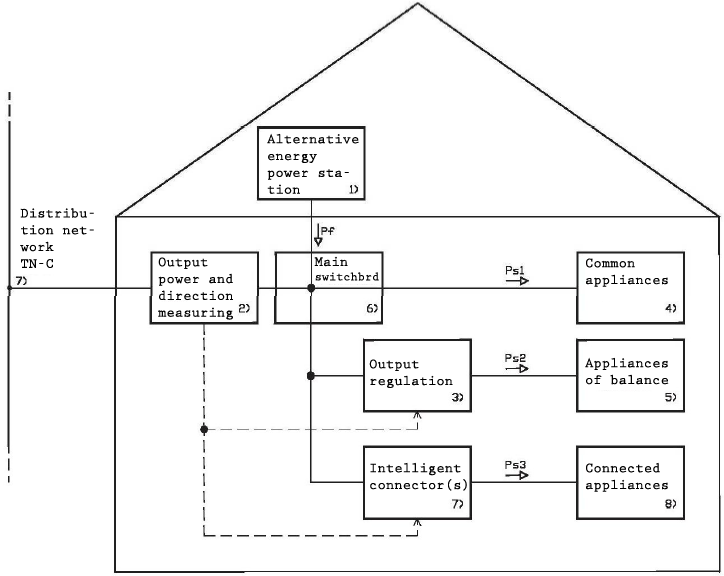 Funciton of the appliance is obvious from the block chart, with connections of all the components only (for lucidity reasons) – such connection may be one-, two- or three-phased. Outer electricity network -(7) – is connected through a block measuring the output’s power and direction (2). Output of the measuring block is connected into a node – it connects the main switchboard (6), the output of alternative electric power station (1), all common household electric appliances in the house or company (4), input of the proportional regulator (3), the output of which supplies energy to the so called appliances of balance (5), which may be for example heat-accumulating appliances or accumulators (of an electromobile), and also the intelligent contactor (7), which operates according to the program chosen by the user – it engages and disengages specific appliances (8). If the electric power station (1) produces less energy in a certain phase and time than is consumed in common appliances (4), the proportional regulator (3) and intelligent contactor (7) are closed and the appliances of balance (5,8), are not supplied with energy. Should the production exceed the consumption, the measuring block (2) activates the proportional regulator (3), through which the exceeding energy is supplied to the appliance(s) of balance (5) *) instead of being fed into the distribution network and/or the intelligent contactor (7) connects and starts the work cycle of the appliances it controls. As stated earlier, switching off these appliances is conditional – the cycle has to be finished and the production of the alternative electric power station has to lower under a defined limit.

*) The feedback loop keeps balance between the output of the alternative electric power station (1) and the sum total of the inputs of common electric appliances (4) and the appliances of balance (5) in order to minimize or eliminate the output back into the electric network. The result is stable and only passive take-off – there is no unwanted impact load on the transmission network caused by intermittent and fluctuating flow of excess electricity – an advantage for the company running the transmission network. The advantage for producers of the electricity is, as stated before, that the donate system of most Europe states is set up to motivate small and medium electricity producers to consume the created electricity in the place of production – this is fulfilled and ensured by the desrcibed device complemented by suitable balancing appliances.